Go lite with Android apps that are small and fast. Space you save on these apps will make room on student BYOD devices for more important, creative apps.
As more schools transition to the BYOD (Bring Your Own Device) model of technology use, teachers may be seeing students try to use their own inexpensive Android phones that don’t pack quite as much punch as might be needed. They may be unable to run the latest, most powerful apps, which could cause problems in the classroom. The answer to this dilemma is to “go lite” with some brand new, lite versions of Google tools that have just launched.

When Facebook came out with lite versions of their Facebook and Messenger apps on Android, I found myself wondering, “How much better will they work?” Microsoft joined in with Skype Lite, built for Android phones in India. Microsoft describes their Skype Lite in this way:

It is small, fast, and capable. It lets you send free text messages and make voice & video calls even under limited network conditions.

Small. Fast. Capable. Those three words define the lite experience. After spending some time with each, I find they are less clunky than the full app. Indeed, they are faster. This makes them perfect for any Android phone or tablet, such as Samsung and Amazon Fire, that may need apps with less of a footprint. While lite apps are available, you may also see web-based versions (such as Twitter Lite) that streamline their interface for speed.

How to Get Lite Apps

Now that you’ve decided to shed a few apps, you may need to get your phone ready. If you’re running the Android Oreo operating system, you won’t encounter too many problems (approve app each time). For any operating system before that, take these three steps to allow app installations from outside the Google Play Store:
That’s it! You are now able to access popular apps. That includes Google tools like YouTube Go, Files Go, Android Go, and, just announced, Gmail Go. In this blog entry, we’ll discuss three of the Go family.

Note: If you or your students get the “No eligible devices” message, you may need to first install a no-cost virtual private network (VPN) like OperaVPN. Then, change your location to an eligible country before visiting the Google Play Store. And don’t worry; the process is easier than you may think.

Although launched for India first, YouTube Go has now became eligible for use in 130 more countries. Watch the short video below for an overview:
The app does the following:
This lightweight app may be just what you and your students’ devices need.

According to Google Play, Files Go “recommends rarely-used apps to remove,” “recognizes and helps you get rid of spam & duplicate images,” “helps you find your important photos, videos, and documents faster,” and “makes it easy to share your files offline — quickly and securely”. Source: MakeUseOf.com

Ready to get your personal assistant to clean your Android phone? Use Files Go.

Like everyone else, I have a love/hate relationship with email. It is incessant, requires repeat visits, and attracts junk. Gmail Go brings together some popular features, such as these points Google uses to describe it:
There are many other apps that allow you or your students to go lite. Keep your eyes open for them since they can make room for more important, creative apps your students need to participate in class. 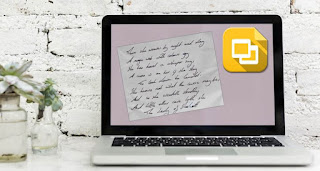 April is National Poetry Month and I can’t think of a better way to celebrate poetry than with student-created digital poetry books made with Google Slides. National Poetry Month was introduced in 1996 by the Academy of American Poets as a way to increase awareness and appreciation of poetry in the United States. Each year in April, tens of millions of students, teachers, and librarians rejoice in poetry’s important place in our lives.

In the blog entry, Slide into the New Year with Student eBooks, I outlined four quick and easy steps on how to create an ebook in Google Slides. Your students will follow this same simple process for creating their digital book of poems.

In order for students to create a book a poems, they will obviously need to write more than one poem. Using a Poetry Marathon format to create a series of short poems around a common theme would work perfectly for this task. The goal of the marathon is to write one poem every hour, for twenty-four hours straight. The reward would be that you would have a collection of poems produced in one day. Of course, that might not realistically work in your classroom. Therefore, you would need to come up with your own rules for your marathon.

Short poems are crucial for this kind of project as Google Slides will lend itself well to fewer words on a slide. This way, images can also be included to add visual representations of the poems.  A few short poems you can explore are cinquains, shape poems, nonsense verse, acrostics, couplets, and haikus. Take a look at these few that I included in my very own book, The One-of-a-Kind Daisy Mae.

Click here to open the digital book.
A cinquain poem is a verse of five lines that do not rhyme. The cinquain poem was created by Adelaide Crapsey.

The end result of creating this kind of digital book is a win-win.  Not only are students engaged in writing poetry in various forms, but they are also using technology to publish a digital book of their original writing.  I hope this National Poetry Month activity will inspire you to keep celebrating poetry digitally all year long!

Looking for some quick tools to enhance reading in your classroom? Look no further than current event sources and online non-fiction. Before we review the list of online news sources, let's remember why it's important.


News in the Classroom

Non-fiction reading has gone online. Video and audio sources deepen engagement. Combine the news sources I've provided below with tools such as:
These tools help students better identify and process online information.You can use them with various online news sources. 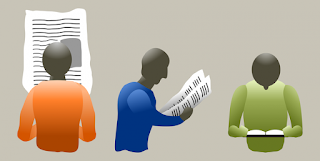 Let's take a closer look at the news sources available to you and your students.

Ready to deepen learning in your classroom? Take advantage of these tools and news sources to enhance your students' reading.

Enhance Your Skills with Chromebook Bingo

Are you looking for a fun way to enhance your Chromebook skills? If so, try Chromebook Bingo with a template to customize for your own classroom.
This past February, I offered a workshop at the TCEA 2018 Convention on how to enhance your Chromebook skills. The first part of the workshop focused on getting to know your Chromebook. To make things more exciting, I decided to gamify this part of the session by allowing the participants to play bingo because who doesn’t like the thrill of finding the last item on their bingo card, jumping out their chairs, and shouting “Bingo!”

The steps of the bingo game were as follows:
Step 1: Each participant accessed a copy of the digital bingo card. They could work alone or in groups. They were to complete each task on the card until a bingo was made.
Step 2: After the first bingo, they continued to play until someone made a blackout.
Step 3: After the blackout, they came up with another skill not already on their card and asked someone in their group or their neighbor if they could demonstrate the skill they came up with.

Create Your Own Bingo Card

Bingo is an incredibly fun game to play and can be used to learn anything from vocabulary to math to even learning more about your Chromebook. And best of all, you can create your own, customized Bingo cards in only a short amount of time.
I used Google Drawings to create the Chromebook Skills Bingo Card. Get your own copy here and see if you can make a blackout. You can even customize the card to gamify your next lesson. What you put on the card is, of course, only limited by your imagination. Don’t forget to give the winner a prize, a small treat, a trophy, a “No Homework” pass … or you can even give out a badge.